The tradition of honoring the dead has existed since the beginning of our species. Many cultures throughout history had their own way of paying respects to those who have passed.

Today, we use flowers, candles, or other personal items placed on or near the graves of the deceased. Sometimes, you’ll even see people leave coins. But why do people put coins on graves?

In this article, we’ll go over the meaning of leaving coins on graves as well as where this tradition came from.

The concept of offering something of value for a deceased individual has been around for thousands of years. Offering coins as a funerary tradition was previously an ancient tradition but has seen a resurgence in modern-day North America.

The practice of putting coins on graves was popularized by military members during the Vietnam War. The Vietnam War was a highly controversial event, especially for the soldiers involved and their families. Soldiers needed a practical way of paying respects to their brothers-in-arms without directly contacting the soldier’s family and possibly causing unwanted conflict.

So, they began putting coins on graves as a silent salute to their fallen comrades. Graves of American military soldiers will typically have a headstone design that commemorates their service. Visitors of the deceased would typically place the coin on these headstones.

Veterans of the Vietnam War placed coins on graves of deceased brothers-in-arms as a promise to buy them a drink in the afterlife. The tradition of coins on military graves continued to evolve to the point that certain coins meant certain things. Here are the types of coins left on graves and their meaning according to the American Legion Auxiliary:

Though challenge coins are left in place, other coins on graves are traditionally gathered by the cemetery caretakers. They’re typically collected and used for the upkeep of the cemetery, supporting soldiers wounded in the war, or helping pay the burial costs of the deceased.

In America, tossing coins on non-military graves is said to bring good luck to the person who threw them. Though the exact origins are unclear, one theory is that it may have come from a Philadelphian tradition of flipping a penny on Ben Franklin’s grave. It’s possible that the famous Franklin quote, “a penny saved is a penny earned” is the reason people toss a penny on his gravestone.

Another notable gravesite people toss coins on is Thomas Jefferson’s. Since the founding of Monticello Graveyard where Jefferson is buried, the custodians that care for the grounds keep headstones clean and also collect coins visitors leave on the graves. Though the custodians still aren’t sure why it started, it’s still used as a type of “wishing well” today. The coins are collected and used for the graveyard’s upkeep. 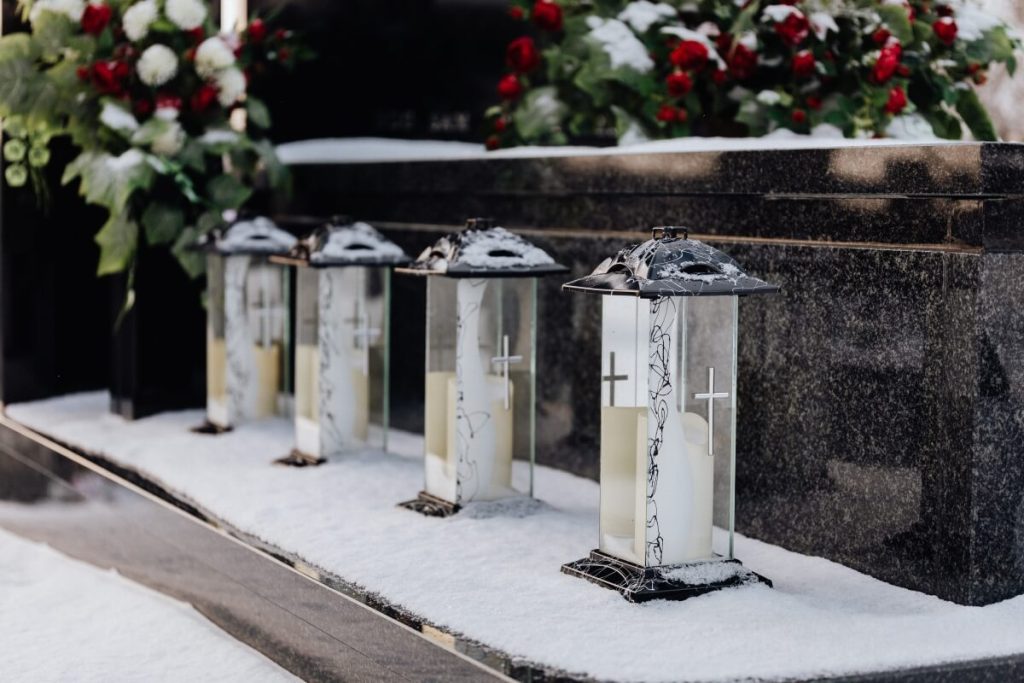 The origins of leaving coins on gravestones can be found in Greek mythology. In ancient Greece, a coin was placed in or on the mouth of the deceased at the time of death – this coin was called Charon’s obol. An obol was a low-denomination coin that was in common use in ancient Greece.

In Greek mythology, Charon is the ferryman who carries the dead across the River Styx and into the underworld. The Greeks believed that if the dead didn‘t have this offering for Charon, their spirit would be doomed to wander the banks of the River Styx for 100 years. So, people would leave coins on or in the mouth, sometimes on the eyes, to help their loved ones make it safely to the underworld.

The practice of putting coins on graves was carried on by the Romans throughout the Roman Empire. In Latin, Charon’s obol was referred to as viaticum, which means “sustenance for the journey”. Archaeological evidence found in graves from Western Europe to the East suggests that the practice spread as far as the borders of the Roman Empire.

The practice was carried on over centuries to today, where it has evolved to people placing coins on a headstone of a deceased loved one.

Similar Traditions To Coins On Graves

Offering something of value to the deceased is an even older tradition that pre-dates the ancient Greek tradition. While the earliest record of currency dates from the 5th century BC, older cultures used other objects of value as offerings for their deceased loved ones

The oldest type of grave money in Asia comes from the Shang Dynasty (1675 BC–1029 BC) in ancient China. One of the common currencies at the time was cowrie shells. These were placed with the dead as a payment to Yan Wang, also known as Yama, the ruler of hell who judged the dead. People would offer a bribe to Yama in hope that he would allow their loved ones a more favorable destination in the afterlife.

Because offerings of value would attract grave robbers, people started using imitation currency instead. They created replicas from clay, called clay money or dark money. Over time, various other objects were used as well, like tablets from clay or precious metals. Later, when paper money became a standard, imitation paper money was used in funerary traditions.

The ancient Egyptians had their own type of offerings for the dead. They believed death was not the end, and the deceased would continue living eternally in the afterlife. To have a good afterlife, they needed to have the same possessions they had during their lives. Thus, it was common practice in their culture to bury people along with all of their belongings.

Similar to the Greek myth of Charon and the River Styx, the ancient Egyptians believed the deceased would travel down the Nile to the underworld. Archaeologists have found burial sites with funerary boats that alluded to this tradition. Similar to the Greeks and Romans, the Ancient Egyptians also placed stones on the eyes of the deceased. The stones were painted with open eyes, which would help the dead see while in the afterlife

In Europe, there is some evidence of coins placed in the mouths of the deceased. However, offerings for the dead were more commonly placed around the body at the time of burial. The offerings ranged from coins to gold, weapons, clothing, and jewelry. These funerary objects were buried with the dead as a way to bring them luck in the afterlife.

Bracelets and necklaces of Germanic and Scandinavian origin were also found in burial sites dating from the Iron and Viking Ages. These pieces of jewelry were composed of multiple coins strung together. They didn’t use real coins but rather round, coin-like objects made from gold or other precious metals. These were also often stamped or engraved with mythological gods or creatures.

Certain symbols would be carved into the headstone or left at the burial site that would signify certain things. For example, a cross would be erected for someone who practiced Christianity

In the Jewish faith, there is a burial practice where people place small stones, called “visitation stones”, on the graves of the deceased. They are a way for people to show they remember the deceased and to pay respect. It isn’t customary to put flowers on graves, as they will eventually die, whereas stones don’t.

This tradition of visitation stones may have come from before people started using gravestones. Before the use of gravestones, large stones would be placed on top of the grave as a marker. Then, one of these would be engraved.

This tradition has also been observed in other places. In Ancient Ireland, smaller stones were placed on the resting stones of deceased individuals. However, their purpose and significance are unclear.

Though cultures throughout time have differed in their traditions, the practice of honoring the dead and paying respects transcends borders and races. Over millennia, we have found unique ways to do so. Whether through offerings of shells, personal belongings, or coins, one thing is a constant – we want to wish our loved ones good luck and a comfortable existence in the life after.

Headstone Designs: What To Put & How To Make Them

How To Clean A Headstone: Marble, Granite & Bronze Care Guide

Top 6 Headstone Etiquette You Should Know About